Amid a pandemic, a lengthy ESPN documentary assesses the impact of Michael Jordan. Tua Tagovailoa Is the Biggest Bet in the NFL Draft

Tua Tagovailoa may be the most talented quarterback in this year’s NFL draft, but teams have to weigh his phenomenal ability to throw a football with the reality that his college career ended due to a hip injury. Baseball Without Fans Sounded Crazy. It Might Just Work.

It sounded more like science fiction than real life: a proposal to stage the MLB season in a functional Biodome-like setting in Arizona. But baseball’s crazy contingency might not be completely crazy after all. Kevin Love Thinks You Should Be Making Your Bed

“At the end of the day, your bed’s all neat, it’s fresh, it’s clean. It’s just really nice and you lay down to rest.” 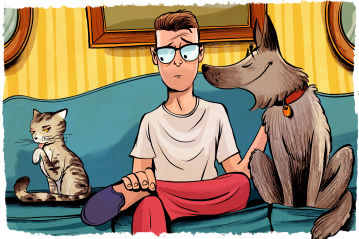 Stay Home! Back to Work! A Dog and Cat Debate Reopening America

You think this decision is strictly yours. It’s not.

The White House convenes a commission to get games up and rolling. But the timeline remains unclear.

A lockdown is making us consider our human limitations. This is OK, writes Jason Gay.

Sharing the Rites of Consolation When We’re Apart

Behind the statistics are mourners unable to find comfort by coming together.

Star Athletes Are Working (Out) From Home

One of the strange consequences of the shutdown caused by the coronavirus is that, in one distinct way, it has made the world’s best athletes just like the world’s most mediocre athletes.

The NBA Might Have Ended College Basketball as We Know It

Why a Second Wave Could Be Even Worse for Sports

A new spike in coronavirus cases is the darkest shadow hanging over the future of sports, concerts and every kind of mass gathering that was commonplace before.

Will Wilson, the new head of the U.S. Soccer Federation, has eliminated the organizations’s boys and girls development academies, reduced its youth national-team programming and laid off or furloughed about 15% of its staff.

The NFL draft is taking place remotely because of coronavirus, and it’s happening with do-it-yourself video kits while picks get announced from NFL commissioner Roger Goodell’s “man cave.”

The WNBA draft will take it over Friday night. And it’s set to deliver something New Yorkers have long dreamed of: the game’s biggest college star delivered to its biggest market.

Although France remains on lockdown, the stakes for cycling’s most prestigious event is crucial for the survival of many teams.

About 10,000 employees from 27 of MLB’s 30 teams are being tested to detect whether they have already been infected with the coronavirus.

Hank Steinbrenner, the Yankees’ general partner and co-chairperson, died Tuesday at his home in Clearwater, Fla., at the age of 63.

The NFL Draft Has a Data Problem—and a Potential Solution

The metrics that NFL teams use to evaluate prospects have been mostly stagnant for decades. A new startup could change that and be the tip of a revolution for evaluating players.

The 49ers Lost the Super Bowl and May Have Saved Lives

The 49ers had a 10-point lead with seven minutes left in the fourth quarter of the Super Bowl. If they had won the game, there could have been hundreds of thousands of fans on the streets of San Francisco for a parade.

Stephon Marbury saw what the coronavirus had done to China. So on March 8, the NBA star-turned-Chinese sports hero decided to sound the alarm bell with an email to NBA commissioner Adam Silver.

The Kids Are Playing Basketball Through a Pandemic

Youth athletes are using free time and technology to improve their games while they’re stuck at home. Just ask the Blackford sisters.

The coronavirus pandemic has prompted sports bodies that usually generate much of their own revenue to seek help.